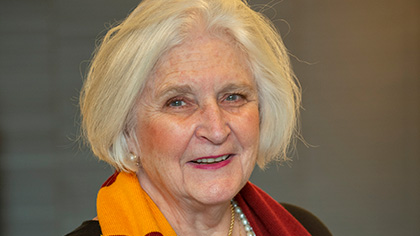 Celeste Sullivan (BBA ’81, MA ’95, CERT [Spanish Literature] ’00, MPS ’01) has had an enriching life journey through her education, spiritual development, and career. Today Celeste, who regularly attends Mass at Madonna della Strada, is in a position to be generous with Loyola and her large extended family. For the past two years, she has designated an IRA rollover to Loyola, splitting her gift among the Gannon Center for Women and Leadership, Arrupe College, and Madonna della Strada Chapel.

“I am grateful to Mundelein and Loyola for a wonderful life,” she said. The oldest of five children and the first to attend college, Celeste began her freshman year at Mundelein College as a theater major in September 1963. Not realizing the difficulty of balancing academics and work, she struggled.

In December 1963, she left Mundelein before taking her final exams. Because she still wanted to go to college, she enrolled at Wright Junior College and continued working.

When her friend Mercedes encouraged her to study in Mexico City, she agreed. “I alternated working at a Chicago law firm and saving enough money for classes in Mexico City. My back-and-forth travels allowed me to study Spanish, meet new people, and experience the Mexican culture.”

“After returning from Mexico, my boss encouraged me to go back to college. So I enrolled in evening classes at Loyola’s University College and received the Otto Lehman Scholarship twice.”

In 1990 Celeste decided to return to Mundelein for a master’s in liberal studies and met with Sister Jean Dolores Schmidt, BVM. Celeste’s file confirmed that her withdrawal from Mundelein in 1963 was due to financial reasons and not a personal failure. “Sister Jean was very kind and enabled me to experience an academic resurrection! Miracles do happen! In addition, the law firm’s tuition reimbursement program paid for my MLS degree.”

In 2000 Celeste earned a certificate in Spanish literature from Loyola.

In 2001 Celeste graduated from the Institute of Pastoral Studies with a master’s in pastoral studies.

“When I came to Mundelein in 1963, my parents were not in a position to financially support me. In the course of my educational odyssey, many people did—including my parents, my bosses, my friends, and many people at Mundelein and Loyola, for which I am extremely grateful.”