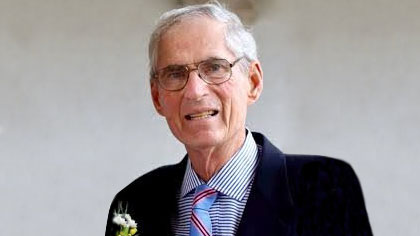 John J. “Jack” Foley (MD ’56) lived a long, happy, and productive life—a life that included undergraduate and medical school at Loyola. Upon his death and in keeping with his wishes, daughters Kathleen and Maureen and son John honored their father’s memory with a gift from their father’s estate to establish the John J. Foley, MD, Scholarship Fund for deserving medical students at the Stritch School of Medicine.

“Our father was very appreciative of Loyola and everything that it provided him for his future success,” said John of his father.

“We also created this scholarship to foster that love of education and learning that we inherited from our parents,” added Kathleen. “Even at the age of 87, my father was reading all the time.”

Dr. Foley and his late wife Eileen, a 1955 Mundelein alumna, met in Chicago when both attended the Lake Shore Campus. He was living in the city with his aunts, Harriet and Florence, and he met Eileen on the bus as they commuted to campus. They were married for 57 years.

After medical school, Dr. Foley served as a captain in the air force and went on to complete a general surgery residency at Milwaukee County Hospital. The young couple settled in Menomonee Falls, Wisconsin, where he and five fellow residents opened a multispecialty clinic, started the town hospital in 1964, and practiced together until they sold the 235-physician practice in 2008.

“My dad cared for patients both inside and outside the hospital,” John added. “Many of the town’s farmers and its mostly blue-collar workers at the time didn’t have health insurance, so he did house calls.”

Dr. Foley was well aware of the costs of higher education and realized that he never would have been in the position to start a practice if he were in debt.

“He knew that there are some very bright individuals who need financial support for medical school and wanted to make a difference,” said John. “He was an honorable guy and felt that this scholarship was an important legacy to leave.”