The Gift of Scholarship
Felicia McClelland 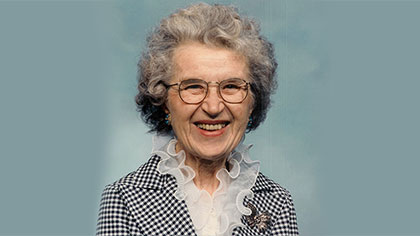 The Felicia B. McClelland Scholarship Fund is awarded to students in Loyola’s School of Social Work who demonstrate a need for financial aid. The scholarship is named after Felicia B. Piekarz McClelland, whose near-century-long life was dedicated to serving others and giving back to the schools that helped her succeed.

Felicia was born in Chicago on August 17, 1915. She attended Loyola’s School of Social Work in 1941 and 1942 and later earned her master’s degree from the University of Chicago. She worked her way through each school, taking on various jobs at places like the American Red Cross, the War Department, and Sears & Roebuck Co. In 1953, she moved with her husband, Orrville E. McClelland, to Akron, Ohio, where she pursued a career in social work.

Through her work with the Summit County Senior Center, Felicia committed to serving others and providing support through faith and gentleness. As a testament to her selflessness and unwavering love for all people, she received the St. Matthew Council of Catholic Women 1995 Woman of the Year Award. She was passionate about helping others, whether through social work or through participating in church, writing letters, or making greeting cards for friends and family.

As the recipient of scholarships that helped her to achieve her degrees, Felicia appreciated the importance of financial aid in helping students to succeed. She specifically requested that all her endowment be used to award scholarships at the institutions that shaped her life. Throughout her many decades, she was an example of how the generosity of strangers can be paid forward to others who need it most.