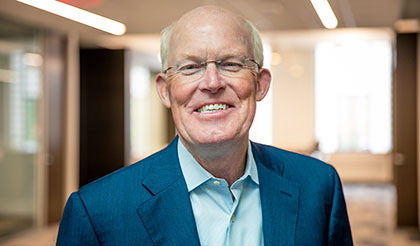 Daniel Coleman fondly remembers his time as a student and residential assistant at the John Felice Rome Center. He described the experience of being 19 and living in Rome as a turning point during his formative years.

“It helped me to not be so myopic, and the experience taught me to embrace other cultures, perspectives, and opinions,” Daniel said. “The whole experience helped me mature into a young adult who was ready to take my place in the world. I gained the confidence to pursue my dreams, and I wasn’t undone by obstacles that came along.”

Daniel’s experiences in Rome solidified his lasting love for Jesuit education. He and his wife Julie recently created as part of their estate plan an unrestricted $75,000 gift to the John Felice Rome Center, which he hopes will go towards maintaining the University’s facilities in Rome for future generations and for scholarships that will allow more students to have the chance to experience Rome and receive a Jesuit education.

“The concept of discernment that Jesuits teach is so powerful,” Daniel said. “The idea of stepping back and really understanding what is being said is critical. The Jesuits taught me not to guess what decision feels right but just to know what is right. You can only get that through discernment. If more people did that, I think the world would be a much better place.”

Daniel and Julie reside in Seattle where he works as the chief investment officer at a local investment firm. He is a seasoned volunteer and proud member of the Rome Center’s Advisory Council.

Daniel and Julie have returned to Rome several times over the years, and, in 2001, they enjoyed a nine-month sabbatical with their five children in Perugia, Italy.