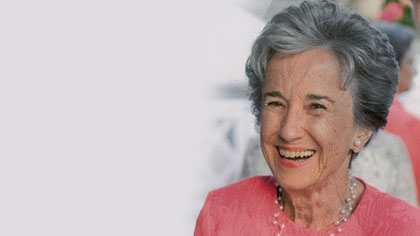 It was almost impossible not to be attracted to Valerye McCarthy (MUND ’52) at any Mundelein alumnae event. There she was, perfectly coiffed, meticulously dressed, and emanating grace with every gesture, word, and glance. While many draw people into a circle of energy, Val would draw people into a circle of peace. A stalwart alumna, she particularly loved to attend events that included the arts or Mass. Often when the Mundelein Alumnae Board would combine the two, Val would see if she could add on an organ concert in Madonna della Strada Chapel just to cap off a perfectly fine Sunday afternoon.

Growing up as an only child of two adoring parents, Valerye extended her family to include her school and parish. Before after-school programs became the norm for many Catholic schools, she stayed after to help her teachers in elementary school and then was an avid club woman at St. Scholastica High School. When she attended Mundelein College, she was immersed in her total college experience—and she enlarged her family once again to include the BVM Sisters and the Mundelein community.

Retiring from a very successful career in banking at Harris Trust & Savings Bank, Valerye joined the morning Mass and coffee club at St. Francis Xavier Parish and enjoyed the many friendships she developed with her parish members. In addition to her faithful annual gifts to support Gannon Center scholarships during her lifetime, Valerye left a large portion of her estate to the Gannon Center as her legacy to Catholic education for women leaders. In so doing, Valerye’s generosity and legacy will help to secure the financial future of the Gannon Center.