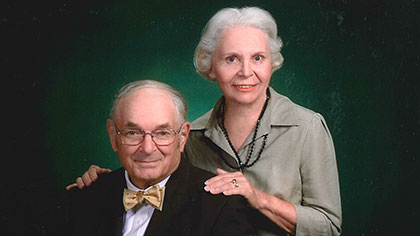 As a tribute to his father, Henry Hartman (MD ’30), Ronald Hartman and his wife Janet established a two-life gift annuity to benefit the Stritch School of Medicine. Henry had established a charitable gift annuity with Loyola in the 1990s before his passing, which inspired Ronald and Janet to follow in his footsteps. After they are gone, what’s left in the annuity will go to fund the Ronald H. and Janet J. Hartman Scholarship in memory of Henry A. Hartman.

The gift, Ronald says, is meant to both pay tribute to his late father as well as honor the significance of the Catholic Church in their lives. As part of a large Catholic family, the Hartmans hope that their contribution will act “as a way of recognizing what was given to Henry from the Lord for his learning abilities.”

Ronald feels an immense amount of pride in his father, whose modest roots began with working as a physician in the small town of Kankakee in eastern Illinois. 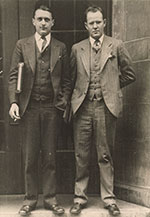 Beginning his career during the Depression, Henry had to pay his dues before becoming a well-established medical practitioner. In 1926 he and a friend drove a Model-T from Pennsylvania to Kansas to earn money working in the wheat fields. From there Henry found a job as a pharmacist in Denver until he enrolled at Stritch. He worked in a pharmacy in Chicago while earning his degree, after which he worked in a psychiatric hospital in Kankakee. After two years he could finally establish his first office.

Henry occasionally took Ronald on house calls after supper to visit his patients, and Henry worked hard to ensure that his children would have the same opportunities as he did to be successful. “He was a very generous person,” Ronald said. “He gave us a lot of things and did a lot of things for us. He was an all-around good father. We wanted to establish some kind of gift in his honor.”

The Hartman family is saturated with doctors; and although Ronald is not one of them, the admiration he has for his father’s work is what inspired him to give back. He is grateful that Stritch provided his father with the skills he needed to become successful during a time when successful small businesses were few and far between.

The Hartmans believe their gift will allow Loyola to fulfill the dreams of future young medical students so that they, too, can become “upright, straightforward students and good doctors.”