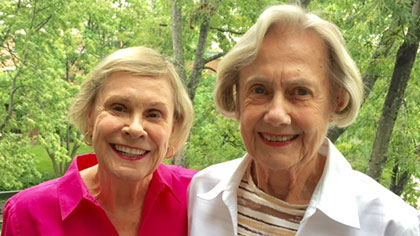 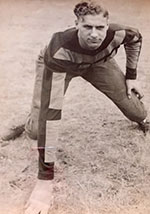 Fred Sextro (BS ’30) lived large at Loyola. During his student days in the late 1920s, he became a prominent athlete on campus—so much so that his letterman jacket from Loyola’s last football team currently resides in Alumni House at the Lake Shore Campus.

During his lifetime, Fred became a generous philanthropist and established charitable gift annuities with several charities, including Loyola. Like their father, sisters Mary Kathryn Black (JFRC Spring ’62, MEd ’75) and Joan Sextro established immediate, single-life gift annuities that will continue providing income to them both for life. The residuum of their annuities will benefit Arrupe College of Loyola University Chicago.

The sisters were inspired to contribute to Loyola and support Arrupe College after Mary Kathryn heard a sermon by Father Steve Katsouros, S.J, dean and executive director of Arrupe College, who occasionally preaches at her parish. She had taught at Oakton Community College for more than 20 years and fell in love with the concept of helping provide students the opportunity to succeed even if their families couldn’t afford a four-year university.

Joan, the elder sister, also maintained a strong connection to Catholic education and started charitable gift annuities to her alma mater, Boston College. Having taught high school for many years, she recognizes the value of a strong support system like the one Arrupe provides. With their father’s connection to Loyola and their own experiences working with low-income students, Mary Kathryn felt that giving to Arrupe was “just the right thing to do.”

“There was no doubt in my mind after I learned about Arrupe and met Father Steve,” Mary Kathryn said. “I’m very lucky to be financially comfort—able enough to pay it forward and give back.”

The sisters are hopeful that their gifts will help Arrupe spread the word about its programs and inspire people to make similar contributions as part of their estate plans. The continued increase in the cost of education is one reason Mary Kathryn hopes more people will follow suit and contribute to Arrupe. “I believe so much in education,” she said. “College is not just important. It’s critical.”