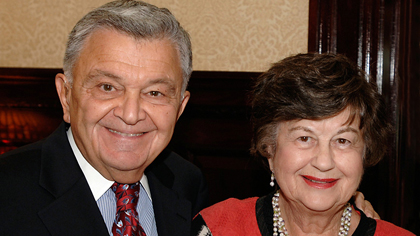 In 1986 Jeanne joined the board of trustees of Mundelein College. After the 1991 merger with Loyola she and her husband Desmond became members of the President’s Advisory Council for the Gannon Center for Women and Leadership. Both remain on the advancement committee for the Gannon Center and have supported the college’s legacy and the University’s efforts for decades.They have designated a bequest of $500,000 to Loyola in support of the Gannon Center.

Q: Why did you choose to attend Mundelein College?

Before college I lived in Boston and worked at Harvard University in my early twenties, where I met my husband Desmond. We moved to New York for his work after he earned his MBA at Harvard Business School before ending up in Chicago.

I was trying to find a school in Chicago that I could attend part time during the day. Most schools didn’t accept students like that. Eventually, I found a wonderful school at Mundelein College, where I thrived as an English major—despite being older than most students. I feel indebted to the BVMs.

Q: What do you hope your estate gift will contribute to Loyola?

Both Desmond and I value the Gannon Center and the Gannon Scholars program in particular. We would like our gift to support the center and this worthwhile program for years to come. We also hope that the research done by these scholars will add appreciably to the knowledge that is contained in the Mundelein archives and in subsequent research on behalf of women.

Q: What message would you have for others considering a similar gift?

I received an excellent education at Mundelein, and the legacy of that wonderful college continues today through the University and the Gannon Center. We hope that other alumnae who valued their experience at Mundelein, in support of future women leaders, will consider making a similar gift as part of the Celebrate Mundelein* campaign.

* Learn more about the Celebrate Mundelein campaign to support Gannon Scholars and the Gannon Center endowment at LUC.edu/celebratemundelein.