Persons for others: Alums pass on family legacy to students 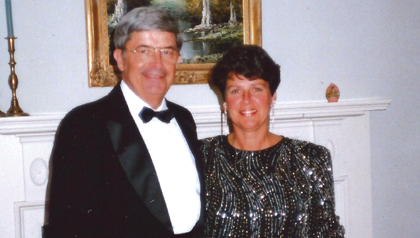 Paul J. Proteau (BBA ’53, MSIR ’58) and his late wife, Roseanne Vitullo Proteau (MD ’62), spent a combined 75 years living out Loyola’s Ignatian heritage as “persons for others.” Paul spent 50 years in the legal profession at a private practice in Oak Park, Illinois, upon graduating from the Quinlan School of Business and earning a Juris Doctor at DePaul. Roseanne graduated from the Stritch School of Medicine and went on to become medical director of Misericordia, a Chicago-area home for people with disabilities, for 25 years. Because of their family’s affinity for Loyola—including their son, Paul M. Proteau (BA ’91), who also attended Loyola—they have designated bequests to both Quinlan and Stritch schools to continue this tradition for future generations. “Ethics was and remains a very important part of business education at the Quinlan School of Business,” says Paul. “There were a number of ethics courses we had to take, and they were important in developing a foundation for our future.” Paul credits this ethics focus for helping prepare him for a legal career.

Paul came back to campus in October 2012 for the dedication of the Newhart Family Theatre in order to connect with long-time friend and Loyola alumnus Bob Newhart. The two attended grammar school together and were good friends at Loyola. “I enjoyed my time at Loyola,” says Paul. “It was a very happy period in my life.” That experience and his desire to support the future of business education at Loyola led him to designate a bequest to the Quinlan School of Business.

When Roseanne attended the Stritch School of Medicine in the early 1960s, there were only two women in her class. She graduated in 1962 and became medical director of Misericordia from 1972 until 1996. Along the way, she received many awards and served on a number of committees independent of her work at Misericordia. She contributed regularly to medical journals and research in her field. In 1992, she was afflicted with arteriovenous malformation, a debilitating disease that eventually forced her to leave Misericordia. Because of Roseanne’s love for Loyola and in honor of her time there, the Proteaus have also designated a second bequest to the Stritch School of Medicine so that aspiring doctors, nurses, and medical professionals will be afforded the same quality education as Roseanne was 50 years ago.