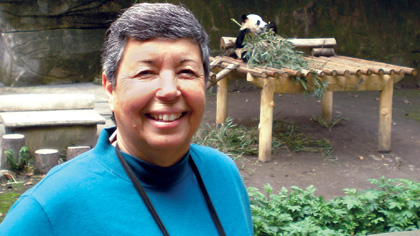 In the wake of the Cuban Revolution of the 1950s and on the heels of a communist movement in Cuba, Mayda de Armas (MUND ’66) fled political upheaval at the age of 17. Catholic Charities USA ran a refugee camp in Miami, where she ended up for a short time in 1961. A year later, she was sent to Chicago to live with a Catholic family and attend high school classes in the summer. In fall 1962, Mundelein College awarded her a grant to go to college. Today, 50 years later, de Armas has designated a bequest to Loyola University Chicago’s Ann Ida Gannon, BVM, Center for Women and Leadership in honor of the gift of education that changed her life.

When she fled Cuba, de Armas’s parents were not allowed to leave. Her father left a short while later to live with his brother in Los Angeles, and her mother came over a few years after that. Meanwhile, de Armas supported herself while studying sociology at Mundelein by working in the Evanston Hospital kitchen serving food to patients. “Thanks to the grant I received, I was able to get a degree,” says de Armas. “My time there was wonderful—not only what I learned but also the friends I made and the environment.”

Upon graduating, she joined her parents in Los Angeles. She earned two masters degrees there, worked as a social worker for Los Angeles County for two years, and got her teaching and counseling credentials. She joined the Los Angeles Unified School District as a Pupil Services and Attendance (PSA) counselor, making house calls to families with children not going to school. While working as a PSA counselor for 40 years, she also taught English-as-a-second-language (ESL) courses at night for several years and was in the army reserves for 21 years.

Now retired, she enjoys traveling abroad and has visited nearly 50 countries in her lifetime. “I think the unification of Mundelein with Loyola is a good thing,” she says. “Mundelein still has its own identity, but it can become even stronger financially and continue on through the Gannon Center as part of the greater university.” De Armas is leaving a general bequest to the Gannon Center to be used where needed most. “I hope this gift will help another student in a position like I was in.”