A legacy of service: A son memorializes his father's work 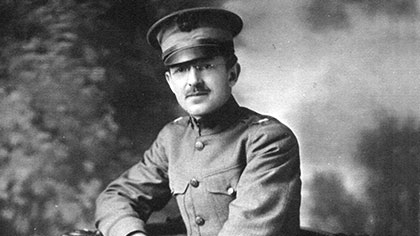 Dr. Raymond Hillmer, a member of the first group of medical students to graduate from Loyola in 1909, instilled within his son a passion for the practice of medicine. To honor his father's legacy and love of Loyola, Dr. Philip Hillmer named Loyola's Stritch School of Medicine as a 50 percent beneficiary of his estate. This generous gift will endow the Raymond E. Hillmer, MD Scholarship, which will assist students pursuing their medical education at Stritch.

A member of an old Chicago family dedicated to serving others (his great-grandfather was a three-time state senator), Dr. Hillmer says that his family taught him to do the same. "My father had high admiration for Loyola, its remarkable philosophy, and his training there. I consider this the gift he'd have given if he had had the opportunity."

After completing his medical education at Loyola, the elder Dr. Hillmer practiced in Chicago and La Rose, Illinois, before joining the Medical Corps during WWI, where he served as a captain, first in Waco, Texas, and then in Siberia. He returned to LaRose in 1918, where he practiced until 1927. For the remainder of his 58-year career, he practiced in Michigan's Upper Peninsula, including time as the staff physician for two mining companies and in private practice.

Like his father, Dr. Philip Hillmer is a war veteran, having served as a pilot in Vietnam before returning to the United States to complete his undergraduate and medical education. He is currently a retired reserve officer. After completing a residency in general and internal medicine, Dr. Hillmer specialized in rehabilitation medicine and spent the majority of his career working with veterans as a physician at Bay Pines VA Hospital in Florida. He believes his military service put him in a good position to serve these patients, as his understanding of some of his patients' experiences helped him treat the whole person. Treating the patient as well as the disease is a goal he shared with his father and something they both admired about medical education at Loyola: creating compassionate physicians committed to patient-centered care.

It gives Dr. Hillmer great satisfaction to be able to make this gift in memory of a man who always had time to listen to his patients and never accepted payment from those who could not afford it. "Dad would be very pleased to know that the gift would make it feasible for young medical students to get an education and fulfill their dreams."