Friend to animals and people leaves a legacy 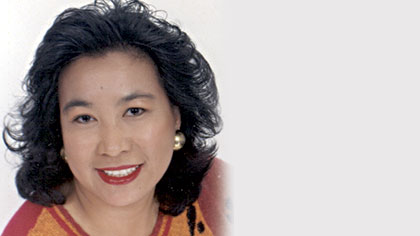 For Mariza "Mitz" Santiano, graduating from Loyola (BBA '85) was the launching pad for a skyrocketing career in sales. She got the entrepreneurial "bug" early in life, selling hot dogs and Kool-Aid outside her family's Chicago apartment, as well as Christmas cards and seed packets to her neighbors. While attending Loyola on a scholarship she also worked full-time at Chicago's Apparel Center, but she says the struggle was worth it.

"I had five job offers when I graduated," says Santiano. Tiring of Chicago's difficult winters, she relocated to Southern California to sell teddy bears with Russ Berrie and Company, Inc. Her career also included owning her own business for five years as an Enesco representative and then rejoining Russ Berrie, on her own terms, as a district manager.

For the last decade Santiano has pursued a different dream—as a realtor. "I now sell single-family homes and apartment buildings to all the people I used to sell teddy bears to," she says.

Santiano is also an advocate for Loyola alumni, serving as president of the Loyola Alumni Club in northern California. "She has really energized the club and its members," says Patrick Ryan, Loyola's regional director of planned gifts. "She's taken a leadership role, organizing a variety of events for the entire year, from baseball games to horseracing events."

One of those events had quite an impact on our four-legged friends in the Bay area. "I partnered Loyola alumni, Coldwell Banker, and the Peninsula Humane Society together in an effort to provide basic needs, such as towels and blankets, for homeless animals," says Santiano.

Santiano also devotes her time to the Foster City Rotary Club, where she's involved in delivering wheelchairs to recipients in foreign countries, including a trip this fall to China. "During my stay in China, I'm planning to visit Loyola's campus in Beijing to help promote the alumni association there as well," she says.

But it is the values that Santiano learned at Loyola that have helped to define her life. "In this tough real estate market, what you give is what you get," she explains. "Distressed property owners are overwhelmed, but my heart tells me that I can help these people even though there's not always a guarantee of getting paid. It's better to be a giver than a receiver."

For Santiano the decision to name Loyola as a beneficiary is a way to give back and make a difference. "While I was struggling to get through school, Loyola was there when I needed it the most," she says. "Alumni should take the opportunity to help other students. We all need to think about the legacy we'll leave."