Joe Silliman: A life devoted to travel and service 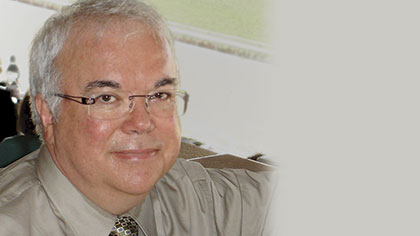 Every student at the John Felice Rome Center develops an appetite for travel. For most, it remains a hobby. But for Joe Silliman (JFRC Spring '62, BS '63), an alumnus from the first semester of the Rome Center, that passion for travel, coupled with a strong desire to help others, turned into a successful business. His agency, Overseas Express, provided value-priced travel services to missionaries, religious orders, relief workers, and qualified not-for-profit organizations.

To honor the memory of John Felice, Silliman has included the JFRC in his estate plans and has designated the funds—valued at $1.5 million—for the center's unrestricted purposes. "John meant a lot to many of us for so many reasons," he says from his home in Sarasota. "I owe John Felice and the Rome Center a tremendous debt of gratitude for what they gave me."

Originally from Louisville, Silliman enrolled at Loyola and majored in psychology. The centerpiece of his undergraduate education came in his junior year. "Somehow, John Felice contacted my parents about attending the start-up of Loyola Rome. Having studied in Madrid during high school, I was quite enthusiastic about the opportunity for more international travel." In the winter of 1962, Silliman set sail from New York, bound for Naples as part of the JFRC's inaugural class. "John and the faculty did everything possible to make that year the first of many subsequent success stories," he says. "The experience in Rome helped many of us shape our future—our lives have been enriched forever thanks to John's vision."

After returning home, Silliman graduated from Loyola, enrolled at Northwestern, and earned a PhD in psychology in 1967. Working with the Chicago Board of Education, he counseled children who had been the victims of abuse. In 1980, Silliman opened Overseas Express. "I had contacts with airline directors and major missionary and non-profit organizations," he explains. "There wasn't any other company like it in America, and I was able to open offices in Chicago, then Dallas, London, and Manchester."

Silliman happily operated the business for several years, but when he became a permanent caretaker to his ailing mother, he became receptive to offers to sell the company. In 2002, Overseas Express was acquired by a Dutch company. In 2007, Silliman retired. Now, he uses his time to assist a local food bank, the Van Wezel Foundation, and Habitat for Humanity.

Through all of the years between studying in Rome and retirement, Silliman maintained communications with John Felice. "I had the pleasure of knowing John as a friend for many years, and until his last days, he still kept his visions for the Rome Center alive. These visions invigorated him despite his serious illness, and I encourage all alumni, staff, and friends to support the Rome Center in any way possible to keep those visions alive."