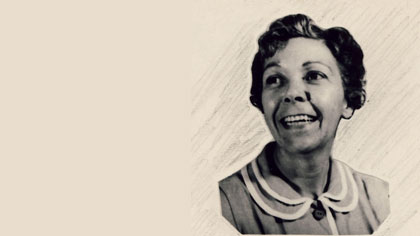 When Willouise "Willie" Donovan was born a century ago, America's library system, too, was in its infancy. Andrew Carnegie's inspiration to allow readers to better themselves by borrowing a book was embraced by Donovan, who spent her life as a teacher and librarian.

Donovan's devotion to the written word now benefits those Loyola students who study in the elegant, warm, and inviting reading room of Cudahy Library. Upon her death in 2007, Donovan bequeathed a seven-figure sum to Loyola that included her family home—and the library's reading room now bears her name.

"The Donovan Reading Room is a most fitting legacy to Mrs. Donovan," says President Michael J. Garanzini, S.J. "We chose to honor her memory by naming the reading room for a woman who loved books and the power of education."

Born in 1909, Donovan grew up in the Edgewater neighborhood—a place she called home for her entire 98 years of life. She lived in the house on Thorndale as a child with her parents and five siblings. She and her husband, John James "Jim" Donovan, lived there after they married. When it came time for Donovan to attend college, she only had to look seven blocks to the north to find a university that would provide an education that matched her family values. Majoring in English, she graduated from Loyola in 1939 and became a teacher. She taught for many years at William C. Goudy Elementary School, just south of where she lived. She later became a school librarian for Chicago Public Schools.

"She was a no-nonsense, take-charge kind of person," says her cousin Mildred "Millie" Hanson. "And she was extremely proud of becoming a librarian." According to Hanson, Donovan was involved in numerous local organizations "and, at one time or another, was president of most of the societies she belonged to."

Though Donovan and her husband had no children, they were active members of their community—giving freely of their time to numerous neighborhood associations and to their church, St. Gertrude's.

As a child of the Great Depression, Donovan learned frugality. She also learned from her mother how to invest wisely. Much of her savings came from investing in the stock market—so much so that on a teacher and librarian's salary, she was able to leave a legacy to institutions whose missions she believed in. "She was also very charitable to those in need and would help anyone who asked," adds Hanson.

It was Donovan's brother, Tom Artingstall, who suggested she give her money to whomever she thought would use it best. "She was a giving person—if something was worthy in her estimation, she'd support it. She was involved not only with Loyola but also with numerous Chicago organizations, including her local ward. She was the one person in her neighborhood that people could count on for help. She was very involved her whole life."

The gift to Loyola is unrestricted, which allows the University to use it where it is needed most. "She would have loved the idea of the reading room named in her honor," says Hanson. Added her niece, Joan Kruzel, "I think she'd be extremely honored. She was a nonstop supporter of Loyola and to know that her gift was recognized in this way would have made her proud."

"The newly named Donovan Reading Room will not only be a place where so many of our students can do serious work, but it also will be a center of campus activity that celebrates both the academic and community values of Loyola University Chicago," says Dean of Libraries Robert A. Seal.