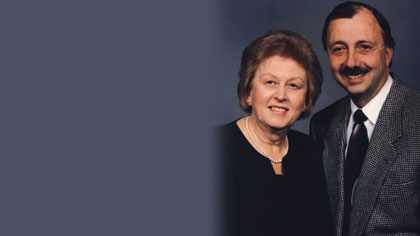 Michael J. Carbon, MD, who sits on the Board of Trustees of Loyola University Chicago, knew from the time he entered high school that he wanted to be a doctor. In 1965, after attending Loyola University Chicago, the University of Illinois, and the UIC College of Medicine, he made that dream a reality. With a transformational gift to the Center for Urban Environmental Research and Policy, Dr. Carbon and his wife Dorothy (MUND '62) have given current math and science students the opportunity to pursue their own dreams.

The prestigious Michael and Dorothy Carbon Scholars Program, funded by a lead trust, will enable Loyola's top undergraduate math and science students to participate in interdisciplinary scientific research, develop leadership skills, and deepen their commitment to social responsibility. "Loyola has started a wonderful program that my wife and I feel can help young people advance their careers as well as develop research opportunities at the University," says Dr. Carbon. As for choosing a lead trust to fund the program, Dr. Carbon explains that, "it allows me to give more. Loyola receives the funds immediately and at the end of the trust it comes back to the estate. It's good for Loyola and good for my family."

A lifelong Chicagoan, Dr. Carbon enrolled at Loyola in 1958, drawn to the school on the strength of the University's science programs and pre-med curriculum. Dr. Carbon was immediately impressed by Loyola's faculty. "Dr. Casseretto was one of my favorite teachers. He taught chemistry to pre-meds and was such a wonderful person," Dr. Carbon remembers. While studying at Loyola, Dr. Carbon went on a blind date arranged by some friends and met Dorothy, who was also a student at the time. More than forty years later, the couple has been blessed with four children and eleven grandchildren.

After finishing his bachelor's degree at the University of Illinois and then graduating from the UIC College of Medicine in 1965, Dr. Carbon interned at Cook County Hospital for a year. He then spent two years in the Army, including one as a medical officer in Vietnam. After returning home, he went to the University of Miami and completed a residency in internal medicine and a fellowship in nephrology, a subspecialty in internal medicine that specializes in kidneys. He came back to Chicago in 1971 and practiced general medicine and nephrology in Aurora at the Dryer Medical Clinic until 1979. Then he joined Nephrology Associates, a clinical practice and dialysis services group. By 2001, the business had 70 kidney centers caring for about 7,000 patients and was sold to a larger company. Dr. Carbon now focuses on administrative work within the practice.

Through the years, Dr. Carbon has increased his involvement with Loyola. "I'm a physician and I did my pre-med at Loyola—that's my attachment to Loyola and that's why I wanted to donate. My wife, a Mundelein alumna, also has a good relationship with Loyola," he explains. In 2001 the College of Arts and Sciences granted Dr. Carbon a BS, but the relationship between Dr. Carbon and Loyola is deeper than a duty to an alma mater.

"Loyola was the foundation of my career. The teaching at Loyola was excellent and the philosophy and theology classes were so important. I didn't realize it then, but later I understood how important they were," he says. Dr. Carbon believes that in today's world, Jesuit education is vital to not merely teach young people technical skills, but to help them be successful, balanced human beings who can go out into the world and excel. The Michael and Dorothy Carbon Scholars Program will certainly contribute to student development for years to come.