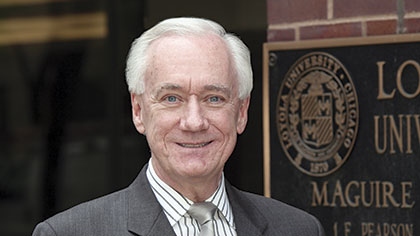 So it's not surprising that when Kevin structured his estate plan, he made the Quinlan School of Business the beneficiary of his retirement funds and a life insurance plan. "Loyola was my ticket off the farm," says Kevin, who grew up 55 miles from Chicago in rural Hinckley, Ill. "I'm giving thanks to the university with these gifts."

Kevin chose to establish his charitable gift in a way that provides him with flexibility during his lifetime and the satisfaction that he has provided meaningful support for his alma mater. He intentionally funded the life insurance policy so that Loyola will receive the maximum benefit. "Your dollar goes further," he says.

A student of the Kinder Institute of Financial Planning, Kevin takes a humanistic approach to advising his clients. "Financial life planners are about more than the money," he says. "My philosophy is to try to understand people and help them define what's important. Then I help them figure out how to pay for it. It's a blend of the behavioral and the financial. It's my Loyola background. I'm helping people live extraordinary lives."

Kevin grew up one of three sons in a farm family. He started college at Illinois State University, where he considered majoring in education, then turned to business. But when Loyola offered him a business scholarship for his sophomore year, he moved to Chicago and majored in accounting.

Once at Loyola, Kevin took classes in the liberal arts, joined a fraternity, and participated in student organizations. During his junior year Kevin was selected by Esquire magazine for a week-long student program in New York, offering his opinion on subjects ranging from fashion to politics. "I went from the farm to New York in less than four years," Kevin says.

After graduating, Kevin worked at Arthur Young & Co. and then at First National Bank of Chicago, where he entered the world of international business. "I traveled the world for five years when I was in my 20s," Kevin says. He then came back to Chicago to earn an MBA in finance and international business. In 1981, Kevin became an instructor of accounting at Loyola. Within three years, he was voted Faculty Member of the Year by his students.

Still, Kevin decided to leave teaching to focus on business, and in 2001 he became a certified financial planner. "I'm now applying my background to individuals," he says.

Today, he's giving it back to Loyola. "I'd like the proceeds from my gifts to go to business-merit scholarships," he says. "Because of my scholarship, I've always felt close to Loyola."