The legacy of Miriam Cooper: Supporting social work scholars since 1983 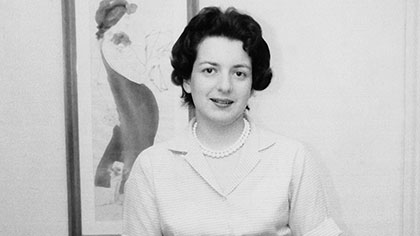 During her lifetime, Miriam Cooper was committed to helping others and found that becoming a clinical social worker was the best means of doing so. She received a Master of Social Work degree from Loyola in 1976 and went on to work for Wilmette Public Schools.

Miriam's professional life was extremely important to her, says Charles Cooper, her husband of 33 years. "Miriam clearly wanted to work full-time. She loved the field, but wasn't employed long before her health began to fail. Even after she became ill, Miriam used to dictate her reports to me. That made me feel like I was part of the social work world, too."

In 1983, the year Miriam died, Cooper established a scholarship in her name to support students pursuing an MSW who demonstrate financial need, high academic standing, and a promise for a future in social work.

"Creating the scholarship was an easy decision. I had a close relationship to her work because I helped her with it," Cooper says. He continues to honor her legacy at Loyola by providing additional support for the scholarship through his charitable remainder unitrust. This type of trust will pay income to him for his life, and Loyola will receive the remainder for the scholarship.

First-generation college graduate and 2010 Miriam Cooper Scholar Ira Stevanovic (MSW '10) is just the kind of student the scholarship was meant to help. Growing up in war-torn Serbia, Stevanovic developed a passion for social justice. "By being named a Cooper Scholar, I can continue Mrs. Cooper's legacy by promoting social justice. I am very grateful to the family for this tremendous gift," he says.

The Coopers first met in Chicago when they were in high school and renewed their acquaintance in the 1950s when they both lived in New York City—they bumped into each other outside the Metropolitan Opera House. Eventually, the two married and moved to Evanston, Ill. When the youngest of their four children was 12, Miriam decided to go back to school and chose Loyola for her graduate studies.

"I can see similarities to Miriam in today's students," says Cooper. "It's heartening to see their joy in what they're doing and to see their perseverance and good spirits."

Cooper, a former member of Loyola's Council of Regents and a current Society of the Shield member, stays connected to the school by meeting the students who receive the scholarship. "I'm pleased that Loyola makes certain that I know the recipients," he says. "It helps me maintain contact while remembering Miriam."

Since his first gift in 1983, Cooper has provided more than $100,000 in scholarship support for more than 20 grateful students and is helping make educational dreams possible, as well as continuing Miriam's spirit for successive generations of social workers.