A lifetime of service to the JFRC 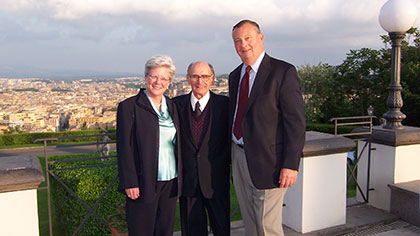 The John Felice Rome Center forever changed Leonard Slotkowski Jr. (JFRC '65-'66, BA '69, MEd '72). He has returned to Rome more than 15 times since his original trip, was one of the founders of the JFRC alumni board 13 years ago and served as past president, and he now has created a personal trust with a specific distribution of $50,000 to the JFRC for student scholarships.

An Oak Park native, Slotkowski chose Loyola for its cosmopolitan identity. He studied abroad in Rome in 1965-66 as part of the last class at the original campus, CIVIS, located behind the 1960 Olympics stadium.

"I was fascinated with European history, and I wanted to travel to the place about which I had studied," says Slotkowski. He wasn't disappointed. It wasn't just the grandeur of the locale that made Slotkowski's time in Rome memorable; it was also the people he met. "It's an exceptional community. We became extended family."

After graduating from Loyola, Slotkowski became a teacher and went into the family business of sausage and casing manufacturing. He retired this past summer, but still spends some time as a startup business consultant. In October, for the third time, he traveled to Poland with John Kurowski (JFRC '73-'74 , BA '75) to hold a symposium on social justice for JFRC and Polish students.

A lifelong supporter of the JFRC, Slotkowski encourages others to invest in the future of the program. "I think JFRC leadership is very dedicated to the vision of John Felice. Father Garanzini is committed to making this a jewel of Europe—the finest study-abroad program on the continent," he says. "They just finished the new library. They expanded the summer school. There's talk about starting an alumni week of study. The key thing is to increase support to the JFRC."

Slotkowski thinks the JFRC's mission is critical. "Travel is education," he says, "and the more you understand other societies, the better you can contribute to the world."

Leonard Slotkowski Jr. created his legacy to support tomorrow's Rome Center students. Contact us today to learn how you can create your own legacy of giving.