A family legacy: honoring Loyola through the generations 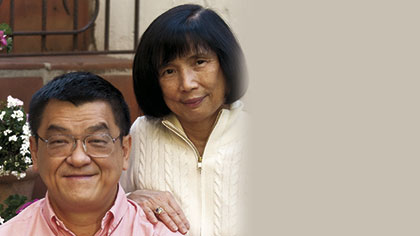 When Dr. Mario Tse (BS '77, DD '81) started at Loyola in 1973, he began a family legacy of Loyolans. While studying at Loyola, he met his wife, Theresa (BSN '75). Together, to honor family members and with a shared appreciation for their education, the Tses created endowed scholarships named for Dr. Tse's late father and brother, one for the School of Law and another for the Stritch School of Medicine.

Dr. Tse grew up in Hong Kong and attended a boarding school in California. At age 17, he moved to Chicago to attend Loyola and become a dentist. Several years later, his sister and brother also attended Loyola for dentistry. Dr. Tse opened his own practice in 1981 and settled  in Pasadena, California, where he works today.

"It was just phenomenal," says Dr. Tse of his time at Loyola. "It was such a great experience." What made it great were the personal connections. The first person he met at Loyola, his resident advisor, became a lifelong friend and godfather to his son.

While studying dentistry, Dr. Tse met Theresa, who was trying to support herself and attend nursing school. Nearly in danger of dropping out, Theresa received a full scholarship from the School of Nursing, allowing her to complete her degree. Today, she is a nurse manager at Los Angeles County and University of Southern California Medical Center.

Several years ago, the Tses created an endowed scholarship at the School of Law in honor of Dr. Tse's father, who had worked as a client liaison in a large Hong Kong law firm.

"Loyola is a very giving, very compassionate Catholic environment," says Theresa. "We had always wanted to give something back, and now we are able to do so."

The Tses also recently established a scholarship endowment at Stritch to remember Dr. Tse's brother, who died  20 years ago. "I thought it was about time I set up something in his memory," says Dr. Tse. "We hope our modest contribution will help ease the financial burden of a medical student, many of whom graduate with tremendous debt."

With a strong family legacy at Loyola, the Tses plan to remain connected. "Loyola is a wonderful place," says Theresa, "and we hope to continue to give."