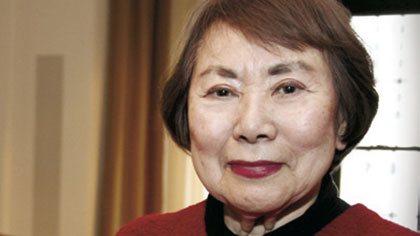 At the time of World War II, Dr. Kumiko Watanuki (MUND BA '84, MA '87) and her seventh-grade classmates had to work in a Tokyo munitions plant sewing uniforms for Japanese soldiers instead of studying. Today, Dr. Watanuki has four degrees and is an active 79-year-old professor and business consultant. Her Mundelein College education and close ties to the Ann Ida Gannon, BVM, Center for Women and Leadership have inspired her to make several substantial gifts to Loyola, including a bequest that half of her estate be donated to the Gannon Center.

"We were denied education, because during the war we had to do things other than learn," Dr. Watanuki says. "When I came to the United States, I went to college and learned a lot."

In 1957, Dr. Watanuki moved to the United States with her American husband. She earned a general education degree and later, in her 50s, earned a bachelor of arts in management from Mundelein College and a master of science in organizational development from Loyola.

"Mundelein College prepared me with a quality education as a stepping stone toward my life in the United States," says Dr. Watanuki.

Dr. Watanuki has maintained a close relationship with the Mundelein BVMs since the early 1980s and is a member of the Spirit of Mundelein Club giving society.

"I am very happy to be a part of exciting education programs at Loyola that develop, promote, and sustain women's leadership initiatives," says Dr. Watanuki. "I want my money to go to students and support education."

In appreciation of her education, Dr. Watanuki established a Gannon Scholars scholarship program in 2005 to encourage women to pursue science education. This program awarded a scholarship of $7,000 a year for five years. Since then, she has continued her support with annual donations of $2,000 for current scholarships and $10,000 to the Watanuki Scholarship Endowment for future student scholarships. Since 1992, Dr. Watanuki has owned a private consulting firm, Watanuki & Associates, and served as an adjunct professor at DePaul University. She has traveled around the world for business and currently travels annually to Bangkok, Thailand, as a visiting professor at Assumption University.