Supporting the future for aspiring nurses 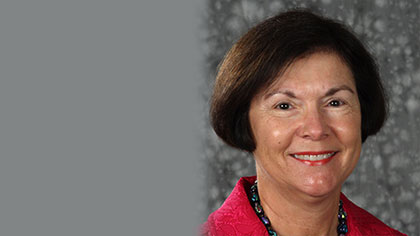 Wendy Barr, PhD, RN (BSN '69), cannot remember a time when she didn't want to be a nurse. The newly retired lifelong nurse and educator grew up with a single mother who could not afford to send her to college. That dream became a reality, however, when Dr. Barr received a full Presidential Scholarship to Loyola. The good fortune and quality education she received at Loyola led Dr. Barr to establish an endowed scholarship so that others could have the same opportunity.

Dr. Barr attended Loyola's nursing school in the late 1960s. "I remember it as one of the most wonderful times of my life," she says. "I lived in Stebler Hall with about 90 other girls. We were like a big family." She graduated from Loyola in 1969 and dove into her field as a critical care nurse at the University of Wisconsin Hospital in Madison. Over the next decade, she and her husband moved back and forth between the east coast and the Midwest, finally settling in Texas in the early 1980s. Along the way, Dr. Barr obtained her master's degree in critical care nursing. Later, she got her PhD in nursing from Texas Woman's University.

In 1985, Dr. Barr began teaching critical care nursing to undergraduates at the University of Texas Arlington, where she remained until she retired this past summer. She also directed the school's Master’s of Nursing Education program and taught in the PhD program.

"From the time I received a scholarship to attend Loyola, I vowed that whenever I had money someday I was going to give back as much as I could," says Dr. Barr. "I want other people—students like I was—to be able to attend a wonderful school like Loyola." In 2005, she did just that. Dr. Barr established the Wendy J.Barr Endowed Scholarship in Nursing, which provides scholarship support to undergraduate nursing students with a GPA of 3.0 or higher. She supports this scholarship annually.

Dr. Barr values her Jesuit education and hopes others who feel the same might consider making a similar gift. "I firmly believe that we need to give back to others and pay it forward," says Dr. Barr.