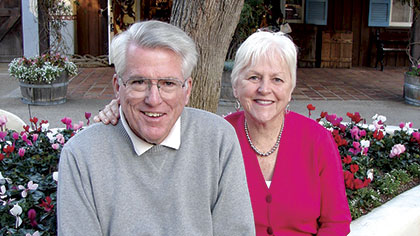 For Dr. Richard Nagle (MD, '63), a career of practicing medicine began 50 years ago when he graduated from Loyola University Chicago's Stritch School of Medicine. During his time at Loyola, he met and married his wife, Alice (MUND '61), and they had their first of five children. To honor their affinity for Loyola, the Nagles set up a current scholarship fund for medical students and made a provision in their estate plans for future scholarship support.

The son of a Stritch graduate, Dr. Nagle grew up near the Lake Shore Campus. He attended Loyola Academy and grew to respect the Jesuit service-oriented approach to life. So enrolling at Stritch seemed a natural fit. He met Alice Connelly while she was attending Mundelein College. They married at the end of his second year at Stritch and welcomed their first child during his final year. "It was all so thrilling," he recalls. "As I studied at Stritch, we were settling in to life."

The Nagles moved to the Berkeley, California, area in 1970 after Dr. Nagle finished his neurosurgical training at the University of Illinois. He practiced medicine in California until his recent retirement. Along the way, he came to truly appreciate his time at Stritch.

"My neurosurgical practice was both pediatric and adult, so I faced moral and ethical decisions at the beginning and at the end of life frequently," he says. "But I never felt at a loss in making those decisions or advising families because of my ethical training that began at Loyola."

In a two-fold show of gratitude, the Nagles established the Nagle Family Medical Student Scholarship Fund as part of the University's Access to Excellence: The Campaign for Scholarships to provide support for current students. They also made a provision in their estate plans for ongoing support to this fund. "We want to help students who are overwhelmed by bills for medical education, particularly those with young families," he explains.

During a recent visit to Stritch, Dr. Nagle noted that the student experience had improved since his day. "It's impressive, all the things that are going on, like the new Center for Simulation Education," he says. "It's critical that we support Stritch financially so it can remain a high-quality school."