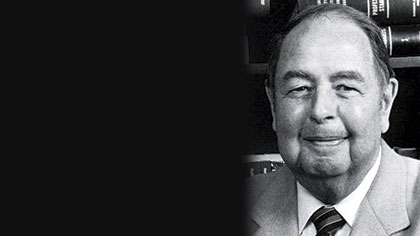 For 41 years, Loyola Professor John Jozwiak (BA '50, JD '54) lived in the same Rogers Park apartment, not far from Loyola's Lake Shore Campus. Even when he retired, it did not make sense for him to leave—the Loyola community was his home. When he passed on, Jozwiak remembered Loyola with a significant estate gift that has funded two endowed scholarships for students.

Jozwiak, known affectionately to his friends as Jack or Joz, was born and raised in Chicago. He attended Loyola Academy before enrolling at Loyola, where he earned a Bachelor of Arts in 1950 and a law degree in 1954.

After eight years as a student, Jozwiak remained drawn to Loyola and its values, and he accepted a position there teaching business law. While teaching, he chaired the Social-Legal Studies Department and served on the advisory board for Loyola's Center for Values in Business. His passion for his students and strong commitment to ethical business practices earned him a Distinguished Service Award from the Quinlan School of Business in 1998.

Jozwiak's love for his alma mater was evident in not only his work but also his generosity. He created three charitable gift annuities at Loyola, and after receiving lifetime payments, those annuities became substantial six-figure estate gifts to the University. With his unrestricted gift, Loyola established two endowed scholarships in his honor: one for the Quinlan School of Business and one for the School of Law.

A further look into the life of Jozwiak reveals a philanthropic commitment to the Chicago community. A lifelong member of St. Henry's parish, he donated to it and to several other city churches and organizations.

Those who knew Jozwiak remember him as a caring friend and engaged listener. "What was always interesting to me was that you would rarely see Jack speaking," recalls John Janiga (BBA '79, MBA '82, JD '88), professor in the Quinlan School of Business. "With precious few words, Jack seemed to know how to draw out information from others, so that when the conversation ended, the other person felt better—about their troubles, about their day, about themselves, even if for just a few minutes.”

Today, Jozwiak's gift and legacy will make the education he valued possible for future Ramblers.