Leaving a legacy for future generations 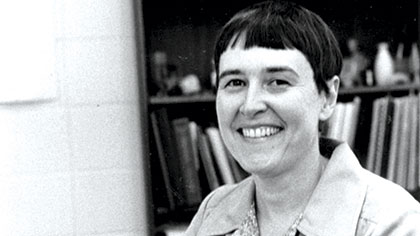 If an alum can be characterized by her life's work, passion, and legacy of giving back, Joan Steinbrecher (MEd '64, PhD '80) was a Rambler through and through. Dr. Steinbrecher was a member of the Loyola family for nearly 50 years as an employee, student, and volunteer. After she passed on, Loyola learned of a final act of generosity: a substantial estate gift, adding to a long career of quiet service and loyalty.

Born and raised in Chicago, Dr. Steinbrecher attended the College of New Rochelle in New York. She returned to Chicago and began working in the Office of Student Affairs at Loyola, her father's alma mater, in 1959. Dr. Steinbrecher earned her master's degree in education at Loyola in 1964 and her PhD in student personnel and higher education in 1980. At Loyola, she held positions including dean of women students, associate dean of students, and dean of student services.

After retiring in 1995, Dr. Steinbrecher began volunteering at her home parish in Chicago, and in 1998 she returned to Loyola as a part-time assistant in the facilities department. She also volunteered at the Gannon Center and participated in many campus activities.

Dr. Steinbrecher gave back to Loyola in countless ways, and she supported Loyola with modest annual gift s for more than 25 years, holding the distinction of "Loyola Loyalist." As an only child who never married or had children, Loyola was her family. After a half century of devotion to her alma mater, Dr. Steinbrecher's six-figure bequest established a legacy that will improve the lives of students for many generations to come.

In recognition of her service and generosity, Loyola named the Joan Steinbrecher (MEd '64, PhD '80) Atrium after her in the new Arnold J. Damen, S.J., Student Center—a fitting homage to a lifelong champion of the University.