Adele M. LeGere (MUND ’48)—LeGere’s named as a beneficiary of her IRA Loyola’s Gannon Center for Women and Leadership Endowed Scholarship Fund to help and encourage future generations of women to pursue their own dreams.

Ken March (BS ’69, MA ’72, PhD ’73)—His final wish was to create a legacy to repay the university that gave him his education and the tools for his successful career.

Felicia McClelland—Throughout her many decades, she was an example of how the generosity of strangers can be paid forward to others who need it most.

Suzette M. Mahneke (MSN ’88)—“If it hadn’t been for the financial aid I received at Loyola, I wouldn’t have been able to afford school. I wanted to give that same chance to students today.”

Daniel Coleman (JFRC Spring ’77) and his wife Julie included the Rome Center in their estate plan so that future students could have the same transformational Jesuit education in Rome.

“I believe so much in education. College is not just important. It’s critical.”

“He was an all-around good father. We wanted to establish some kind of gift in his honor.”

Valerye McCarthy’s generosity and legacy will help to secure the financial future of the Gannon Center.

“This scholarship will help carry on Tamara’s legacy of educating young people who are financially less fortunate.”

“We are fortunate to be able to support future medical professionals in this way.”

James Venskus (BA '70, MA '88) made a provision in his estate plan for an endowed scholarship that will provide opportunities for students to study abroad.

Dr. Robert (MD ’85) and Pamela Munson have designated a significant gift in their estate plan to support scholarships for Stritch students.

Dr. Jeanne (MUND ’74) and Desmond LaPlace value the Gannon Center and the Gannon Scholars program in particular. They would like their gift to support the center and this worthwhile program for years to come.

Dr. Richard Wellington Poley (MD ’57) set up a memorial scholarship in his honor of his good friend, James Blake Patterson.

Anne Bannister (JFRC FALL ’84, BBA ’85, MBA ’93) has supported the Rome Center for many years because of her deep connection to it.

Dr. Michael Carbon did his pre-med training at Loyola and was a successful physician for more than 30 years. He and his wife Dorothy have funded a program for students to do scientific research with faculty.

Chuck Whittingham (BS ’51) graduated with honors from the English program and went on to be the publisher of LIFE magazine. He has made several gifts to the University, including a recent estate gift.

Michael Hutz (Class of 2015) is a student at the Stritch School of Medicine who is grateful for his education and for several scholarships he has received.

Pat Wozniak (BSN ’59) has pledged to support a general-purpose scholarship for the Marcella Niehoff School of Nursing’s Excellence in Nursing Fund and has made a further provision for the fund in her estate plan.

In the wake of the Cuban Revolution of the 1950s and on the heels of a communist movement in Cuba, Mayda de Armas (MUND ’66) fled political upheaval at the age of 17.

Characterized by her life's work, passion, and legacy of giving back, Joan Steinbrecher (MEd '64, PhD '80) was a true Rambler.

At the time of World War II, Dr. Kumiko Watanuki (MUND BA '84, MA '87) and her seventh-grade classmates had to work in a Tokyo munitions plant sewing uniforms ...

An appreciation for international experiences, confidence in the direction of Loyola University Chicago, and a passion for Italian culture inspired Ruthellyn (BA '75) and Ron Musil ...

Education is a central theme in Bill (MBA '71) and Pam Russell's lives. Bill credits his MBA from Loyola with giving him a platform for success in his career ...

The first in a family of five siblings to be college educated, Dr. James Choy led a distinguished life, whether volunteering on a hospital ship ...

Fern Asma, MD, is sympathetic to the costs facing new physicians as they start their practices, especially in paying back school loans and purchasing medical liability insurance.

During her lifetime, Miriam Cooper was committed to helping others and found that becoming a clinical social worker was the best means of doing so.

Aside from the fact that Kevin McGirr lives down the street from the Water Tower Campus Quinlan School of Business, he's always felt close to Loyola.

Myrtle Kilcrease (MEd '77) has always been passionate about preparing the next generation for tomorrow's challenges.

Marie and Brian Fitzpatrick fell in love with the John Felice Rome Center, though not at the JFRC—that would come years later.

Michael J. Carbon, MD, who sits on the Board of Trustees of Loyola University Chicago, knew from the time he entered high school that he wanted to be a doctor.

When Willouise "Willie" Donovan was born a century ago, America's library system, too, was in its infancy.

Every student at the John Felice Rome Center develops an appetite for travel. For most, it remains a hobby.

For Mariza "Mitz" Santiano, graduating from Loyola (BBA '85) was the launching pad for a skyrocketing career in sales.

According to his children, the late Vincent Galante, (MD '43) was talked into attending medical school by his elder brother, Charles, already an established physician.

Alumnus Michael Sullivan (BS '61) credits much of his success in life to his years at Loyola.

Dr. Raymond Hillmer, a member of the first group of medical students to graduate from Loyola in 1909, instilled within his son a passion for the practice of medicine. 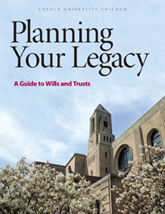 "Planning Your Legacy: A Guide to Wills and Trusts" is a helpful workbook when doing your estate plans. Order your free copy today: